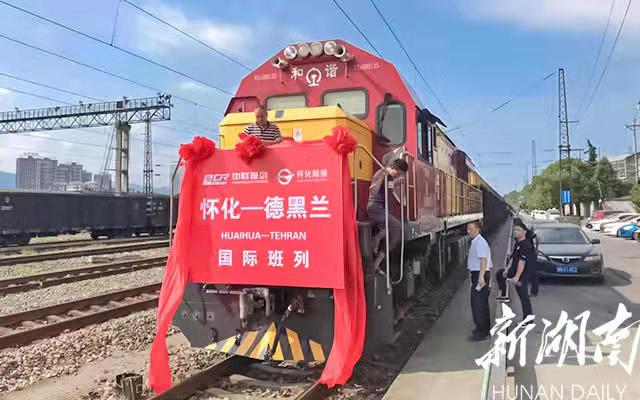 There is brief introduction of China international railway freight line to Iran, the situation of transportation of Inner Mongolia and Hunan Changsha railway station of China to Iran and transit time.

The choice of this train from Bayannaoer has a lot to do with the local cargo transportation needs. Bayannaoer is rich in sunflower seeds, and Iran has a large demand for sunflower oil. Most of the sunflower seeds produced here are sold in the Iranian market, but the Inner Mongolia Autonomous Region is far away from the sae freight port. The goods need to be transported to Tianjin or Qingdao Port. It is transported to the ABBAS port in Iran through international shipping containers, and the transit time is long and the transportation cost is high.

Changsha - Europe railway shipping services is a new route of China Railway Express started on December 28, 2017, from Changsha, Hunan, China, to the to Tehran, Iran. It passes through Horgos and is the gateway to Central Asia in South China. The Silk Road is a new threshold.

The line of Changsha - Europe railway shipping services to Iran is: Changsha-Horgos/Atenkori - Kazakhstan - Balashak / Shelkh Kakar - Turkmenistan - Salahs / Sheilahes - Iran, the whole journey is 10297KM. It is estimated that it will take 15 days. The Chinese exit port is Alashankou. It takes about 4 days to change the train tracks in the two places of Dostyk and Salahs.

China railway freight of Changsha - Europe railway shipping services to Iran is fixed every Thursday, and before every Tuesday you need to clear the customs, that is, you should at the latest send the goods to Hunan Changsha North Station on Monday. This is similar to the export operation process of the sea freight, and the time is similar.

Changsha - Europe railway shipping services container China to Iran railway has been in operation for about 6 months so far. For container requirements, only 40-size HQ (40 HQ) booking cargo service are provided. There is no such services for 20-size small cubes and 40 GP flat cubes, and the service is relatively simple.

departure station of China to Iran Railway freight is not only Bayannaoer in Inner Mongolia Autonomous Region, but also Changsha in Hunan, China. Xi'an and Zhejiang Yiwu have also opened international multimodal freight services to Iranian container railway freight, whether it is Changsha - Europe railway shipping services or Yi Ou Banlie, If you have goods in any place in China such as: Shenzhen, Shanghai, Beijing, Qingdao, Guangzhou, Xiamen, Foshan, Zhongshan, Huizhou,and so on. You can transport goods to these Stations, through the international railway freight forwarder - Goodhopee Freight International Logistics, which will help you quickly transport your goods to Iran by railway.

Although it is necessary to reach the standard of departure frequency of China Railway Express every week at a fixed time, and it is still a little difficult for keeping balance between export and import. I believe that China to Iran railway is not only the end of China's New Silk Road, but we see Iran as the starting point of Central Asia, which connects China to Central Asia, Europe and Russia. Central Asian railway freight, and China-Europe railway freight promote the overall economy prosperity and development of the Belt and Road.